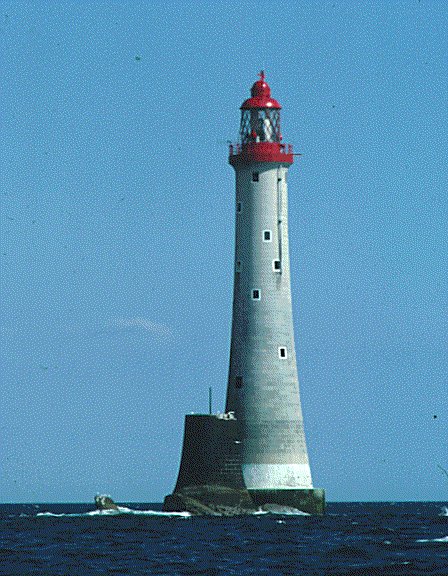 The Eddystone Lighthouse is arguably the most famous lighthouse in the world. The stories of the towers which were built on the notorious red granite reef have already been related many times elsewhere and I will not repeat them again. For me, however, it is the most significant part of my love of lighthouses and before I embark on other articles about lesser known lighthouses, I must begin by describing my own experience. The Eddystone reef lies about eight miles to the south of Rame Head and twelve miles from Plymouth Hoe. Although they have all heard of the Eddystone lighthouse, very few of the inhabitants of South Devon and Cornwall are well acquainted with the lighthouse, except as a familiar distant shape on the horizon. In the early part of this century pleasure craft frequently took sightseers on tours around the lighthouse, but this ceased during the War and the trips were never re‑commenced. Even the familiar picture postcards for visitors to send back home to friends and relatives dropped from view on the news‑stands. Today, only fishermen seeking the spoils which frequently accompany the wrecks and reefs of the English Channel visit the Eddystone rocks. Many keep it at a safe distance, as do passing yachtsmen, rightfully fearing its treacherous waters. Only those with accurate charts approach close enough to experience the awe and mystique of the atmosphere surrounding the tower. My love of lighthouses began in 1965 when I discovered that my great‑great‑grandfather, George Goldsack Knott, was a keeper of the Smeaton Tower between 1861 and 1866. At that time there was a lot of concern about the prospects of the tower surviving. The problems were not with the tower but with its foundations for the reef itself was being undermined by the continual battering of Atlantic breakers and the tower had developed a frightening shudder. So bad was it that even seasoned keepers found it unnerving to carry out their duties in the worst storms. It seemed that there was no long‑term alternative: a new tower must be built on the adjacent reef to the east. This was finally achieved by Sir James Douglass between 1878 and 1882. The shape which uniquely identifies the Eddystone lighthouse is caused by the remains of the old Smeaton Tower on another part of the reef to the west of the more modern lighthouse. Rather than allow Trinity House to destroy the beloved Smeaton Tower, the people of Plymouth raised sufficient funds to have it dismantled and re‑erected on the grassy slopes of Plymouth Hoe, where it stands today. However, Smeaton had never intended his tower to be removed and the task of dismantling the solid base proved too much. It was therefore left behind and a new base made for the upper parts to stand on. It was not until 21 July 1976 that I was able to get close enough to take my own photographs. On that occasion I had managed to secure a place on a fishing trip, supposedly to the Eddystone, but the skipper was unwilling to go close and remained a mile or so distant. Nevertheless, the weather was sunny and I was able to obtain reasonably good photographs. I noted in my diary that "the red paint of the lantern seemed almost luminescent ‑ far brighter than I had imagined." In the south‑west approaches to the English Channel, the Douglass family had been responsible for the erection of three similar towers, Wolf Rock in 1870, Eddystone in 1882 and Bishop Rock in 1883. The lanterns of each had been maintained in different 'liveries' in order to assist with identification. Thus, Wolf was black‑capped, Eddystone red‑capped, and Bishop Rock white‑capped. In the days when there were three keepers continuously manning the tower, it was a rare honour accorded to only a select few to be allowed to enter the tower. This was perhaps understandable because of the danger involved. Entry was by breeches buoy only and was frequently hazardous in difficult sea conditions. Not surprisingly, Trinity House were not prepared to risk lives unnecessarily. Several authors of lighthouse books made note of their frustrations. In his book devoted to lighthouse keepers, Tony Parker used the opening page to reproduce a letter from Trinity House curtly refusing to allow him to visit the Eddystone lighthouse. The frustrations of living so close to such a romantic lighthouse yet being unable to even get close to it, let alone inside it, were considerable. In the 1960s it was a regular news item at Christmas to hear of the difficulty experienced in providing the keepers with their Christmas fayre. The sea conditions were often poor and it necessitated several attempts for the mail and the turkey to be landed in time for the festivities. This annual ritual became history overnight with the introduction of relief by helicopter. This application of new technology was first tried out on the Wolf Rock in the summer of 1973 when a helipad was erected for the first time on a British lighthouse. Suddenly all the trials and tribulations associated with sea‑to‑rock transfers had gone. The skill of the pilot in landing on a tiny platform over 150 feet up in the air became the limiting factor. The experiment was a success and within ten years, the Eddystone, as well as most of the other manned rock towers had been converted for helicopter landings. Perhaps this was truly the beginning of the end, for it was almost immediately automated; but that is another story.

At 1 pm on Wednesday 3 July 1988 I set sail in MV MARTIN, a 50 feet vessel being used by the Royal Naval Engineering College for diving training. As a well‑known lighthouse enthusiast, I had been invited to participate in a visit to the Eddystone Reef, some 12 miles south of Plymouth Hoe and the diving supervisor had promised he would do his best to set me ashore on the old stump of Smeaton's Tower. At first the weather did not look too promising for there was a considerable fog, but the sea was calm and had been so for several days. There was therefore a very good chance of achieving a landing. MARTIN was able to maintain a steady eight knots and by 2‑30 pm we were in the vicinity of the rocks, but it was long before that when we became aware of the Eddystone fog signal. It was to be an uncomfortable afternoon. 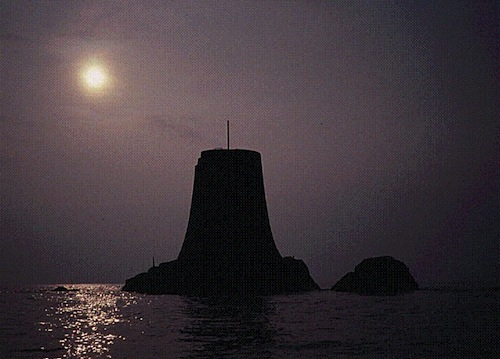 It had been decided to anchor MARTIN about a mile to the south east of the rocks and then to proceed to the rocks in the Gemini, an inflatable and very manoeuvrable lightweight craft which was better suited for the divers. The fog was beginning to lift and the sun just breaking through as we left MARTIN in the Gemini and proceeded into the Gut between the two main parts of the reef. The tide was high, though it was not a spring tide, and most of the rocks were covered, and it was easy to approach the landing area which had been used by so many people before me, including the great Smeaton himself. As I stepped onto the rock with great care because of the slippery marine growths, it was as if I was in a dream. For twenty‑three years I had lived for the day when I might set foot on the Eddystone rocks and here I was at last! I waved my friends good‑bye as they left to carry out their diving exercise and proceeded to inspect at close quarters the remains of the world's most famous lighthouse. In view of the amount of work which had been carried out over three centuries on this small area of rock, there was surprisingly little to see. A few holes marked the places where stanchions had formed guard rails for on‑coming keepers and other personnel. I found several old iron bars protruding from the rock on the north side and it was clear that these had been let into pre‑cut holes in the red rock and fastened in position by pouring molten lead into the remaining space between the bar and the rock. I wondered if these had been some of the original Winstanley fixtures. This, I had to admit, was probably unlikely in view of all that had taken place on such a small area of rock over so many years.Probably with more care than I have ever taken in my life, I climbed the vertical rungs to the top of the stump. The rungs were slippery and either coated in green weed or gull excretion. One slip would have resulted in a fall of twenty to thirty feet followed by broken limbs on the jagged rocks and subsequent drowning in the deep, black waters of the Gut. I was not prepared to take any chances! Fortunately, I arrived safely at the top where I found the most wonderful display of craftmanship, the like of which has rarely been repeated. Huge granite stones weighing a ton or more each, were splayed out in a most wonderful geometric pattern, intricately hand‑crafted dovetailed shapes fitting together to form the most perfect arrangement. After more than a hundred years of exposure to the worst of the Atlantic storms, it was hardly surprising that some damage had occurred and several of the stones had become dislodged from the positions Smeaton had intended two hundred and thirty years earlier. The damage was comparativley small when compared with that which besets many larger and more massive sea defences than this. I could see my friends going about their diving business, at times curious as to why I should possibly want to be marooned on such a thing, but mostly keen to get on with the job of exploring the deeps around the reef. Perhaps they would stumble upon some new wreck or artefact? In such a place of past human torment, the atmosphere was embrittled with the tension of history. They left me in peace for well over an hour - well, as much peace as you can get with the fog signal blasting away. Yet strangely, it did not really bother me, such was the sense of privelege I felt for the fulfilment of my life's ambition. I was busy enough deciding on the many subjects for photographs. I had brought every conceivable kind of photographic material for the never-to-be-forgotten experience so each frame had to be repeated many times. Having said that, the angles were somewhat limited from the tiny platform available to me, but I made the best of them. As the hour passed, the fog gradually lifted to reveal a beautifully clear and sunny afternoon which lent new colour to the photographs and by the time my friends returned to recover me, I was delirious with joy. 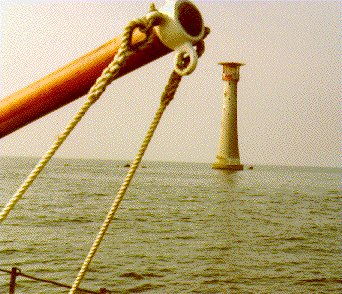 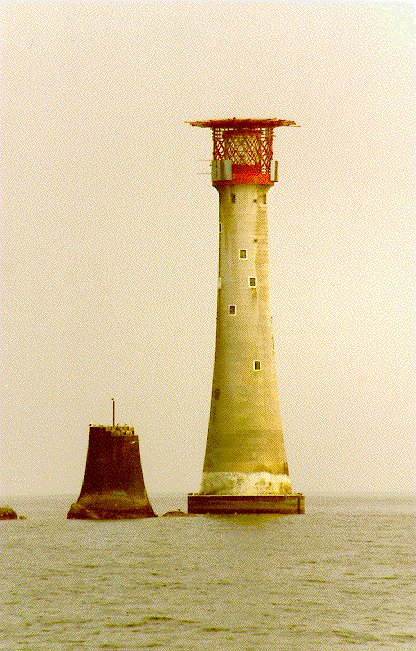 General view of the Eddystone lighthouse and Smeaton's stump (1992) 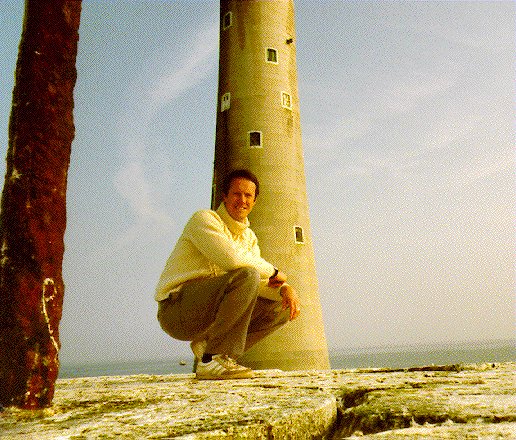 Ken Trethewey on the stump of Smeaton's lighthouse (1992)