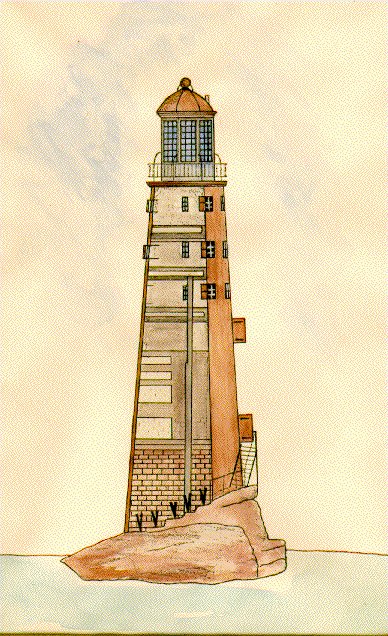 The Eddystone lighthouse by John Rudyerd (1708-1755). A tower mostly of wood and constructed like a ship. Artwork by Ken Trethewey.

On a cold December night in 1755, John Hatherley handed over his night duty to Henry Hall, who grumbled about lack of sleep. He could be forgiven, however, for he was ninety‑four years old and the weather was foul.

John climbed down the ladder into the kitchen which was in darkness as usual except for the dull red glow from the range. Descending another level he arrived in the somewhat colder bedroom which was almost totally dark. Irregularly he could hear the loud 'thump' from down below as a large wave hit the base of the lighthouse. Simultaneously a short and fairly severe tremor could be felt throughout the whole structure.

John was not really afraid. After four years of keeping the most exposed lighthouse in the world, he was beginning to get used to the vibrations. He worried most when he remembered how Winstanley's tower had been swept away from this very rock with its architect inside it. The lighthouse he was in had been designed by John Rudyerd forty‑seven years earlier and had survived far worse storms than the present inclement weather. John himself had been in the tower during some extremely bad storms and there had been times when he had thought he would never return to Plymouth alive. Always the tower held firm. Rudyerd had certainly known what he was doing when he had designed this tower. Strangely enough, Rudyerd had never once come back to see for himself how the lighthouse was standing up to the sea. In fact, he had not been to the lighthouse since the day it was completed. Everyone thought he must have died soon afterwards and John was inclined to think so too, although he could not understand why no‑one knew of Rudyerd's fate.

The tower gave another shudder as a wave expended its energy against the smooth wooden timbers. It was very much like being in a boat in a storm. In fact, Rudyerd had designed the lighthouse to be more like a ship than a house. He had even employed two shipwrights to help him build it.

Suddenly the words, "Fire, John, Fire!" disturbed his subconscious. He realised that it was Henry calling down the ladder from the kitchen. Henry was frantic. He shouted for buckets of water. John and his mate both ran down the ladders as fast as they could for the buckets were kept in the lowest of the four rooms, along with the other general stores. It was suicidal to go out on the reef in this weather and at night, but they needed the water and there was no alternative. Things were desperate. John filled the four buckets he had brought and passed them up to his mate, whereupon they frantically climbed back up the ladders to the lantern room. In their haste, much of the water was spilled. Even for two fit men who were used to the climb it was an exhausting effort when done at full speed and they arrived at the top to find Henry incoherent with fear.

Almost before the two breathless keepers had got into the lantern room, the buckets were snatched from their grasp by the old man and hurled upwards towards the fire. Most of the water descended on the thrower and after a loud hiss and even more clouds of steam and smoke had billowed forth, the fire continued unabated. It had obviously taken a firm hold on the lantern roof. It was incredulous. A fire was raging in the roof of the lantern, and here they were having to run up and down the ladders carrying buckets of seawater. The task was obviously hopeless but it was their only chance. The two younger men feverishly scrambled down the ladders once more.

Henry was helpless, crouching low on the floor for air. What could he do? He looked up into the glow. The heat was blistering now and his mouth was gasping for air. Suddenly a shaft of white hot pain was thrust down his throat. He screamed in agony and collapsed on the floor. His lips, mouth, throat and stomach were on fire. Just at that moment the others appeared with buckets of seawater. Henry grabbed a receptacle and began drinking the seawater like a man possessed. Most of it had been spilled on the floor and on Henry's clothes. The other two did their best to quench the fire with the other buckets that had been brought up but it was to no avail. "Henry's gone mad!" John shouted above the crackling of the fire in the timber. "He just drank the seawater."

They both looked at Henry who looked desperately ill and then began to vomit vigorously as the seawater took its toll on his system. They decided to abandon the fire and retreated back down the ladder to the kitchen. The smoke was suffocating and Henry was being most uncooperative. It seemed to be raining inside the lantern. Every so often a small stream of boiling liquid fell to the floor, scorching the wet planking and hissing loudly. Then they realised it wasn't water. It was raining molten lead.

They dragged Henry down the ladder as best they could. Surely the fire would be seen from the shore? It was ironic that the lighthouse was now performing its role far better than it had ever been designed to do. The feeble candles which provided the warning light to mariners had rarely been seen from more than a few miles away. In contrast to the skills and sheer hard work needed to build the tower, the method of lighting it was pathetic. Yet here, with the whole of the upper portion of the tower in flames it was giving a better warning than it had ever done before.

Slowly and steadily, the fire consumed the lighthouse and before long, the three weary and frightened keepers were compelled yet again to retreat to the lowest room. This was to be their last refuge inside the tower. Was there any chance of surviving outside on the reef? John knew that the tide was on the ebb and would be so for another four or five hours, but there was nowhere on the rocks big enough or far enough away from the falling timbers for them to hide. Then John had an inspired idea. He remembered the small part of the rock known as the 'cleft' where there was a tiny ledge and some mooring rings. But, most important, there was an overhang of rock which could protect them from falling metalwork.

As they set foot outside, although it was still dark, they could see quite clearly the immediate area surrounding them. They could not see the tower, however, because of the overhang of rock which sheltered them. The heat from the inferno frequently swept over them with each down‑draught. Then began a long and terrible wait. Though safe from falling debris, they still had to contend with the sea which insisted on dowsing them liberally and frequently. The water was so cold that almost immediately the three men were shivering uncontrollably, despite the heat filtering down from the fire.

Dawn came, but no sign of a boat. The tide had ebbed sufficiently for them to be receiving far less frequent drenchings but the swell was still such that, even if a boat came, a rescue would be very difficult. Finally, they saw a sail. It was a fishing boat and heading straight for them. They were saved and their story was that they had been shipwrecked ‑ from a lighthouse! Unfortunately, Henry Hall died two weeks later from the ingestion of seven and a half ounces (225 g) of molten lead.